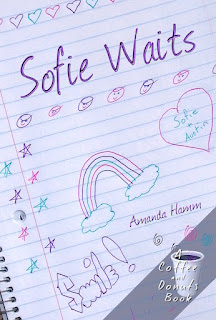 Amber was Sofie’s first friend at a new school and they’ve been inseparable ever since. She’s been the source of countless laughs and occasional dares. She supported Sofie through college and carried her through her mom’s battle with cancer. But if Amber is her rock, Austin is Sofie’s hard place. He’s the only guy she’s ever loved. She can’t tell anyone because he’s also Amber’s brother.Sofie has spent eleven years trapped between her feelings for Austin and her loyalty to Amber, who would be horrified to find out about those feelings. Now something has happened, something that means Sofie’s feelings for Austin are no longer a secret. Sofie can’t avoid the fallout forever, and it might not be anything like she expected.

Amber was significantly behind after only a few turns.  Her ball had been deflected early by a tree root in the badlands, which she had insisted they include in the course.  “I am seriously rethinking the placement of these wickets,” she said.
Sofie gestured in her direction.  “You’re the only one who still needs that one,” she said.  “You can turn it to face you.”
“No, you cannot,” Austin said.  “No moving wickets in the middle of a game, no matter how far behind you are.”
Amber frowned at Austin.  She pointed at Sofie and then herself as though she was counting.  “Looks like you’re outvoted.”  She pulled out one side of the wicket and swiveled it to welcome her black ball.
Austin tried not to let it bother him.  Amber wasn’t going to catch up anyway.  He couldn’t quite keep his mouth shut.  “Leaving one side in the ground doesn’t make it any more legal.”
“Not even if she puts it back after her ball goes though?” Sofie was teasing him for being uptight about the rules.  They’d had games like this all summer.  Amber would get behind, Sofie would encourage her to cheat, then she’d give Austin a hard time for caring.


"I was quite amused by the obsession that Austin's dad had with croquet and the way he always roped everyone else into it. Quirky stuff like this is something that I always appreciate as it makes stories more memorable for me." -- Valerie on Amazon

"This I a really good book." -- Kimberly on goodreads.com

My latest series. I'm hoping to have book 3, which doesn't yet have an official title, released in February. That's plenty of time to read books 1 and 2. Check out descriptions by clicking the covers below. Thank you!

Amanda Hamm grew up in Ohio and now lives in North Carolina. Most of her books are love stories featuring Christian characters, which sounds way less preachy than Christian love stories. Andrew's Key received the CWG Seal of Approval in 2014 and They See a Family was named 2nd place among Catholic Novels in the 2019 CPA Book Awards. After changing to the CMA Book Awards, another 2nd place was bestowed on What Goes Around in 2021.

This four-book series is set in a fictional town in Ohio, where many place names come from Native American words. Andauk is the Wyandot word for four.

They See a Family

This one isn't part of a series, though it does have a short prequel called The Study Group.

This series features a concurrent timeline. It was fun to secretly tuck the characters into each others' stories. Details are in this post, but you might want to read the books first.