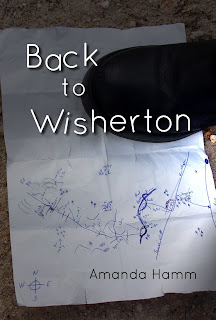 Yavic Say left Wisherton to save his sister. Now he’ll need her help to go back for their parents. Could this mission be even more difficult than the original journey?

The wall around Wisherton is still solid and heavily guarded. Old adversaries will cause new problems. The deadly night lizards are still prowling while the colder weather brings the threat of snow.

And before Yavic and Sevra can face any of that they’ll need to brave the worst task of all, informing their sisters Lolly and Samtry that they aren’t coming.

Lolly and Samtry Say looked almost as alike as two sisters could without being identical.  They had dark hair with a red tint.  Though Samtry’s eyes were green and Lolly’s were brown, they were the same shape with the same thick fringe of lashes.  They both had straight hair that skimmed their shoulders in cute bobs.
Their reaction to the new plan was very different and neither could be described as cute.  Samtry stomped on Yavic’s foot before she fled into the house.  Sevra was surprised by it because she expected a drawn out farewell with lots of tears and hugs.  Yavic preferred having his foot stomped on by someone half his size to a drawn out farewell with lots of tears and hugs.
Lolly’s reaction more closely lined up with expectations.  She stared hard at her brother while her mouth worked to open and close producing no words.  It looked as though she was trying to decide exactly how angry she wanted to be.
“It makes sense for you to stay and help Grandfather,” Yavic said.  Their grandfather had weak joints that needed frequent rest, which was why no one suggested he escort the children.
“He didn’t need help when Grandmother was coming with us,” Lolly retorted.
“But now he has to work the farm and tend to Grandmother.”
“She doesn’t need tending.”  Lolly rolled her eyes.  “She has crutches!”
That might have sounded callous, except that Yavic was certain a broken leg would barely slow Lolly down.  Why would she expect it to get in anyone else’s way?  “You can be a help to both of them,” Yavic said.
“I want to help you!”  Lolly turned her eyes to her sister.  “Sevra?  Will you let me come?”
Sevra sighed and looked between her siblings.  Lolly was attempting to channel her anger into pleading, but it wasn’t working very well.  Her request came out softly.  Her eyes chased it with an expression that clearly said, “Or else.”
Yavic had both hands on his head, fingers spread with dark red hair shooting up between them.  It was never difficult to tell when he was frustrated.  Sevra was torn on who should get her sympathy.  She kind of wanted Lolly and Samtry to come for their company.  She kind of wanted them to stay behind so she didn’t need to worry about keeping them safe.  But it was their grandparents’ idea for the younger girls to stay, and Sevra chose to respect that.  “I’m sorry,” she said to Lolly.  “We’ll come back as soon as we can.”
“As soon as you can?  As soon as you can?”  Lolly’s voice rose towards a scream as she repeated the words.  “I want to come!”
“No.”  Yavic picked up his backpack and pushed his arms through the straps.  He’d set it down because he figured there would be hugs.  Lolly was looking more likely to run away than hug anyone.  He almost wished she’d just stomp on his other foot and get it over with.
Sevra bent and gave Lolly a quick squeeze while she continued to glare at Yavic over Sevra’s shoulder.  “Goodbye, Lolly.  We’ll miss you.”  She picked up her own supplies, a bag bigger than she was.
Sevra’s words had sincerity.  Yavic nodded in agreement as he waved and began to walk backwards.  He wanted Lolly to say goodbye.  She kept glaring at him as though the discussion was not over.  But he and Sevra were leaving.  The discussion was over.
Lolly turned suddenly and walked to the house.  Yavic and Sevra turned as well.  Leaving made Yavic sadder than he expected.  He suddenly wanted to reconsider and take all his sisters with him.  Then he heard Lolly slam the door.  She opened it and slammed it again and again and again.

My latest series. I'm hoping to have book 3, which doesn't yet have an official title, released in February. That's plenty of time to read books 1 and 2. Check out descriptions by clicking the covers below. Thank you!

Amanda Hamm grew up in Ohio and now lives in North Carolina. Most of her books are love stories featuring Christian characters, which sounds way less preachy than Christian love stories. Andrew's Key received the CWG Seal of Approval in 2014 and They See a Family was named 2nd place among Catholic Novels in the 2019 CPA Book Awards. After changing to the CMA Book Awards, another 2nd place was bestowed on What Goes Around in 2021.

This four-book series is set in a fictional town in Ohio, where many place names come from Native American words. Andauk is the Wyandot word for four.

They See a Family

This one isn't part of a series, though it does have a short prequel called The Study Group.

This series features a concurrent timeline. It was fun to secretly tuck the characters into each others' stories. Details are in this post, but you might want to read the books first.